A Big Day at the News Desk 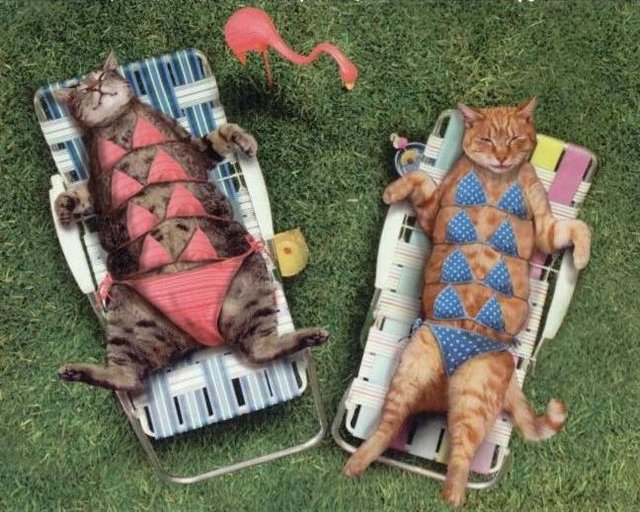 It has been a long time since I have blogged two days in a row, but today there was so much irrelevant breaking news that I just had to dump some of the garbage out of my already small, but full, brain into the vomit receptacle that often is my blog. As is the norm, I have done my best to excessively paraphrase and simplify all of these news stories to better serve the genera needs of the Adventures of Mitch Nation.

Cats Do Control Humans (click for link to story)
If the cat is controlling me, then why does it tell me to throw shoes at it or fling it by the tail into a passing lane of the interstate? I am not a cat person. God didn't want me to be a cat person so he makes my eyes itch when I am around them. This scholarly study further extrapolates that dog people are obviously wiser than cat people as dog people can't be controlled by animals. My less than scientific proof would be that there are a lot people who are pretty normal with 2-3 dogs. However, the people that own 3-700 cats always seem to live in a creepy old house, are single women and go to the grocery store in a prom gown and tiara because they don't get out of the house much and have never been on date. They may also be guys who walk their cats in harnesses to pick up chicks at the local park. There may be a few assumptions here, but my study is working it's way towards being airtight once I run the numbers a few more times.

Holy Shit! Cussing is Good for You!!! (click for link to story)
This is actually news worthy because if reading my blog causes you pain, you can cuss out loud while you read it. I think what's important in this article is that I would like to define pain as anything you dislike physically or emotionally. If we can include this definition of pain in the study we can basically cuss freely about anything (in case you don't already). I can't even imagine the study playing out with college students dipping their hand in ice cold water while repeating a cuss word of their choosing. If they were drinking and passed out they would have pissed their pants as well which would really give them a reason to cuss. This study was done in England so were they really sober when they did this and then accidentally got the study into the NeuroReport Journal? I really like the control in the study where they put their hand in the ice water and repeated a word they use to describe a table. Huh? Pretty much seals the deal on the fact they were drinking when they came up with this study. I guess in the end I would be happy to cuss with my hand in ice water instead of being a part of the totally irrelevant picture attached to the article of a guy getting pepper spray in his eyes. Who's the moron that chose pepper spray over ice water? I'd like to see the second part where you get pepper spray in the eyes and then respond by saying a word you use to describe a table.

I will preface this third bombshell story by saying that I don't frequent OMG.yahoo.com. If I did all of my BFFs would be saying WTF? I was sent here from my yahoo homepage which while I thought was password protected, has clearly been hacked by a 14 year old with a pink cel phone covered in rhinestones, carrying a lame designer purse and who probably owns a dog I could dropkick as far as I can hit a pitching wedge. So, I didn't go to this story because I care about Jessica Simpson, or for that matter Tony Romo, (I do relish his mediocrity and failures on the football field. For those Cowboy fans that are now enraged, please Google: Seattle Seahawks wildcard game 2007) but because someone who is 29 is having a Ken and Barbie birthday party. Really? Didn't we just bury the musician/freak that acted like a small child when he was actually a grown adult? Hopefully Jessica doesn't cut off her nose, or anything else, and try to change here skin color. While the Ken and Barbie party was ruined, and I am sobbing Jessica Simpson made it all better with her worldly quote in the article that makes me want to be in a bubble bath, with a puppy, frolicking in a sunny green field of flowers. Puke.

"Everyone needs to know that hope floats...grab the strings and pull it back to you... Falling asleep with my mom and the dogs. Please, Lord, give all of my beautiful fans, friends, enemies, and family rest. Bring all of us peace."

We now at least know that she isn't paying anyone to write her press releases. You can read the article below.........and don't forget to bookmark OMG.yahoo.com in the process. I have to go now, because Entertainment Tonight is on and there are probably more developments in this massively totally, like, crazy story. I just hope I can sleep tonight.
http://omg.yahoo.com/news/jessica-simpson-dumped-by-tony-romo/25140?nc