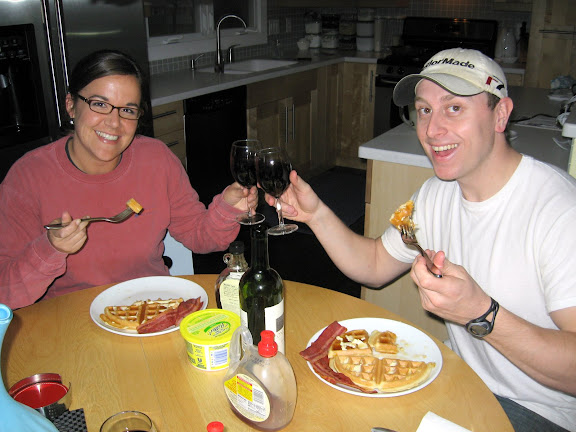 Tonight was an exciting night. WWW night is for wine, waffles and watching TV. After a long winter of no television we ushered in some of our favorite shows with this historic event. Our friend Jessie came over for the infamous "breakfast for supper" followed by some quality television of Grey's Anatomy, Lost and The Office. I chose the breakfast, Brandi chose to take the picture, and Jessie wanted wine........so we threw that in with the waffles. Since it was raining all day and is supposed to snow tomorrow, the wine was probably necessary.

In an effort to make this event a healthy one, we had turkey bacon at Brandi's request. A few comments on turkey bacon:

The pros: It's better for you. It's fully cooked, so you can rip open the package of 'bacon' and eat it raw for a dramatic visual effect.

The cons: It's not really bacon. I'm not sure it really comes from a turkey. I'm not sure it comes from an animal. It is creatively colored to resemble the tasty visual marriage of pork meat and pork fat intertwined into a pan fried delicious taste treat. This visual mirage, however, is about as believable as a hamburger made our of Legos. Cooking turkey bacon, if desired, does not provide much visual feedback. It takes between 4 seconds and 40 minutes to cook. I would like to know who the turkey bacon designer is that decides how much light colored turkey puree to mix with the darker, reddish colored, meat looking, turkey puree to best resemble regular bacon. This visual illusion can be very deceiving........from 100 yards, or farther, away. Gobble, Gobble health nuts and go get your turkey bacon. If you can't find any, just throw strips of an old baseball glove in the microwave for about thirty seconds and enjoy! Maybe tomorrow night I can rustle up some soy based, shrimp cocktail imitations! In other news, did you know that chicken McNuggets are not actually real chicken pieces? Wow, they are molded so realistically so. Who doesn't like chicken Mc Nuggets? Vote in the new poll.
Posted by Mitch Hoffman at 11:10 PM